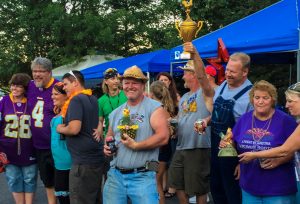 SUV’s and trucks were parked in the steep banked ditch along the road. Most at angles that should have had them rolling over. We backed in our Jeep, angling it so it’s coolers in the back would be pointed at the open vortex where the music was the loudest. As we spilled out, I could see my first mistake. I had too many buttons on my shirt. I looked over at Tiffany, my son’s wife, and could see in her eyes the same thoughts. There is only one fix for all social blunders……the first beer is always the best, well, except for the second. This is not just a wing festival. This is almost a religion. Actually it is much better than most religions. Not just promises, but real salvation from the normal is actually here.

We got here just 15 minutes from when we could start the official tasting but the real party started at sunrise. It started when the campers arrived, and the tents were set up. It started as the smokers were unpacked and gas fired grills fired up. It started when the first beers were opened and the first boasts were heard. By the time we arrived for the eating and voting it was clear the wings were just last two measures of a song that had been playing all day. Looking around at the smiles, sweat, empty cans, piles of foods you realize this must have been a hell of a tune. But then I realized that this song goes on……the volume just gets turned down.

Dante would have loved the set-up. In the center was nothing. Open except for the chest pounding music. Towering speakers provided a sound track of country, and southern rock. Circling that open space of bass and treble, were tables covered with pop-up tents. Except for one end. That is where you came in, bending under the “caution” tape, which marked the boundary and offering a warning. Behind that were the kitchen areas of smokers, coolers, chairs, dogs and kids. Around them came the campers and tents ready for the evening’s last stand. Finally the circled cars and trucks keeping anything not dealing with food, fun and music where it belongs…….forgotten.

There were 3 trophies. One for the best non-traditional wing, one for the hottest, and one for the best wing. The best wing earned you a large golden trophy with a rooster on the top…”the Golden Cock”. Johnny, who invited me, had already made a place on his mantle for this years “Golden Cock”. Above the music we heard that it was time to vote and we attacked the mounds of wings. Trays garnished with fruit, veggies, and sauces to cool the heat. Each one simply with a hand written number on an 8 ½ by 11 inch piece of white paper. 1 to 15. Why is the most complex things so easy to label. I think I discovered a few new sensory areas on my tongue….one causes you to cry. Hot and mild, smokey and sweet, fruity and salty. Wings taking flight under the direction of cruel masters of spices and sauces, combining pleasure and pain. Of course after I was stuffed, then someone asked “had I discovered the cheese burger and bacon egg rolls?” So I had to……..

Wings… giving angels and devils the power to soar over us who stick to the ground. A symbol for that which is boundless and, as Icarus found out, limiting. Wings are the perfect metaphor for this gathering….trying to fly as close to the sun as possible. Pushing everything to the edge with wings that brought tears to your eyes with pleasure, OK, and a little pain. With music loud enough to be felt. With beer so cold, and so endless. With pushing friendships, new and old, higher with stories of the best and worst times of the past. This was not a celebration to be understood, this was all about letting go and enjoying. Yet somewhere in the back of my clouding head, I kept hearing, “too many buttons”.

Aye-Patch is the black hole for the Photo Journalism from Bob Sass and others. This site is dedicated to continuing the vision and vibrancy of Dale Chihuly, the determination for the truth and self sacrifice of Marie Colvin and to Pirates....everywhere...